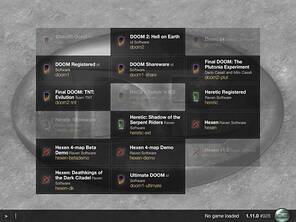 The last couple of years have been mostly about revitalizing the internal parts of Doomsday. While this work is still ongoing, we have now reached a point where we are able to make changes also in the user-facing parts. The highlight of this release is the introduction of a completely new, OpenGL 2 based UI framework that is used for replacing the old in-game console and for providing an easier way to select a game to play in ring_zero.

The road to version 2.0 is still long, but this release is an important milestone: new graphics code is now being applied in the user interface, and libdeng2 based resources are starting to be utilized more. While the biggest task ahead is naturally the next-gen_renderer, we have now gathered most of the components that allow us to begin work on it. 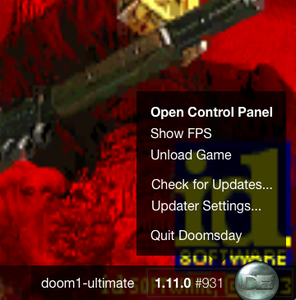 In preparation for future work on the next-gen renderer this release also features a revised internal map representation, modelled with a half-edge_map_data_structure and geometry meshes. This new model combined with several significant bug fixes to the internal BSP builder has already greatly improved compatibility with id Tech 1 format mapping constructs. In the future this model will be instrumental in improving map hack support and facilitate the efficient generation of map geometry for new rendering algorithms.

As we approach 2.0, more and more of the old engine components will be replaced or enhanced. This brings along with it a cleaner, more elegant architecture as the brambles of the old ad-hoc code are being cleared away. Consequently the code base becomes easier and easier to work with, and we are able to tackle harder, more complex, high-level features.