Definitions specify the properties of a material built from one or more textures, for use on the surfaces of world maps (floors, walls etc…).

The focus of this article is to detail how these properties are exposed to mod authors and the specifics of the syntax.

A material is an abstract concept which replaces the id Tech 1 mechanism of directly attributing texture resources to map surfaces. Please see the material documentation for details on their use(s) and the mechanics of the abstraction with regard to mod compatibility.

Using materials one is able to layer textures in a dynamic, “logical material” which can be applied to a world surface. (In contrast to a texture, which is a static composite of one or more graphics).

Materials exist entirely independently from any textures attributed to their layers. This means one can reuse the same textures in multiple Materials.

Note for modders: The term 'texture' in Doomsday refers to any graphic resource which has been loaded for use as an in-game texture. Graphics composited from several patchs according to TEXTURE1/2 definitions are a type of texture. 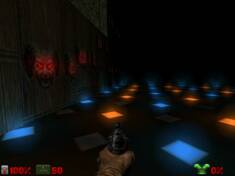 A simple 128×128 Material composed of a single non-animated texture layer: